Following the uproar which the new photo caused on social media, her fans have taken to her comment section to defend her.

In their defence, they pointed out that the former reality TV star wasn’t supposed to wear an ‘agbada’ since she was standing by the poolside. 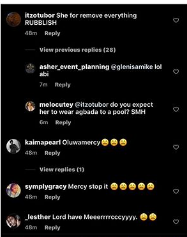 The post Do You Expect Her To Wear Agbada To A Pool? Fans Defend Mercy Over New Photo ‬ appeared first on Information Nigeria.