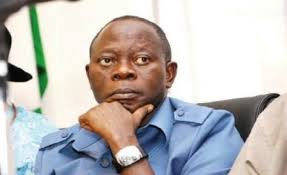 The Edo State Government has petitioned the Inspector-General of Police, and Department of State Services, DSS, to arrest Adams Oshiomhole, the national chairman of the All Progressives Congress, APC.

The petition also calls for the prosecution of Oshiomhole who is a former governor of the state.

This was disclosed in Abuja on Monday by the Deputy Governor, Phillip Shuaibu, who however, stated that Oshiomhole remains his father, a thing that cannot be changed by present situation.

This is coming after Obaseki recently stated that the APC, President Buhari and others are on his side in the face-off with Oshiomhole.

“It is a party matter. We have a party chairman who has been suspended in his Ward. He has no legitimate business to act in the capacity. We will not accept any decisions from him.

“This is the party, I have the 18 local government chairmen of the party behind me. The entire party structure in Edo is one. They are solidly behind the President and behind me as a governor.”