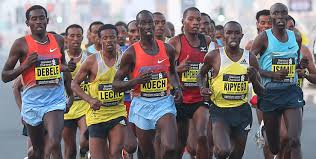 According to a statement issued by Olukayode Thomas, Head of Communications and Media for the Access Bank Lagos City Marathon said the 2020 edition of the Lagos race is a landmark hence the decision to recognise some outstanding individuals and groups that have contributed to make the race the biggest one-day event in Africa.

“This is a landmark year for the Access Bank Lagos City Marathon, our 5th edition, and we are very proud of what we have been able to do just within five years”

“While we are grateful to everyone for all the support we have gotten in these five years, we have shortlisted nine people that have contributed in no small measure to this success story and we will be acknowledging them at the Access Bank Lagos City Marathon Ayodeji Tinubu Merit Award on Friday” Thomas stated

Thomas added that there will also be a seminar for journalists on Friday also at the Sir Molade Okoya Thomas Indoor Sports Hall where accreditation tags would be distributed and a session to intimate those in the media all that is expected from them on race day.

“We are going to be having a session with the media on Friday, the accreditation and the media guide will be distributed during the seminar where we would let everyone know the dos and don’ts for this year’s race”

Over 100, 000 runners will be taking part in the 2020 Access Bank Lagos City Marathon billed for Saturday, February 8.