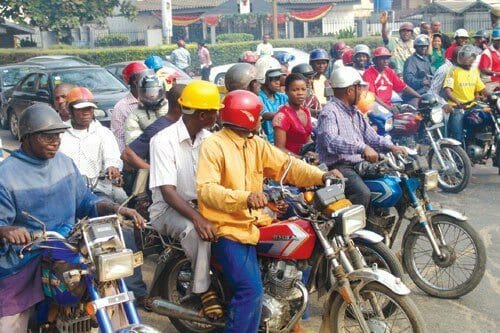 In lieu of the Federal Government’s decision to ban Okada and Keke drivers from the state, Nigerians have been forced to go on endless miles, walking.

Though many have taken to lament on the current unfortunate situation which causes various discomfort as they are conformed to live their daily activities with a couple of adjustments, the Federal Government has revealed that the enforcement signifies success.

During the wee hours of Moday, February 2, 2020 a large number of horses were spotted being trooped in by some young men.

It appears the men have opted to monetize the situation as some people might be tempted to embark on horse rides as against trekking.

The question on the minds of onlookers who watched the horses go by remains, Will the horse riders pay tax? Will there be minimum accidents with animals and road users battling for road usage? Is Lagos moving forward in civilization as a mega city or back in time when man used trekking and animals as means of transportation

Check out the video capturing the animals;

The post Okada ban: Horses troop in their numbers on Lagos streets as alternative means of transport appeared first on Kemi Filani News.